ShaderX7 has now hit the press in the USA, although (at the time of writing) it looks like the UK will have to wait a bit longer. I was luck enough to nab a copy directly from the publisher while at GDC. The first thing you notice is it's really fat this time - definitely one of the largest books on my shelf. It's not short on material and Amazon are currently selling it for a bargain $37.79 - rather short of the $59.99 RRP. Go grab yourself a copy.

Editing the shadows section was my first adventure into the world of publishing, and I'm glad I put in the effort. I was genuinely  surprised by the amount of time involved in editing just 4 articles, so my hat goes off to everyone - authors and editors alike - that contribute to these industry-led books. It's not done for money, it's very definitely a labour of love, and I'm happy that the end result made the work worthwhile.

Which leads me onto ShaderX8! This time around there will be a new section on Mathematics, which Wolfgang is kindly allowing me to get my editing paws on. The idea here is that the complexity and quantity of maths involved in writing shaders has greatly increased in recent times. Early shader models had pretty limited capabilities and most uses of them likely capped out at requiring knowledge of linear algebra - say, vectors, homogeneous matrices, and so on.  But we are now fast approaching being able to run typical x86 code on a GPU and the mathematical models being run are getting correspondingly more complex. There's also more than one way of boiling your mathematical eggs, and performance matters. Part of the process in writing shaders is learning, developing and optimising mathematical models - hence the dedicated new section.

The book is still at proposal stage so what this section really needs now are some article proposals. Please take a look at the schedule on the ShaderX website and email your proposals to Wolfgang before 17th May 09. If you have any questions on the maths section feel free to email me as well. The writing guidelines can be found here.

Complexity of maths in shaders

Here's my 2p on the complexity of maths in modern shaders.

I expect almost all graphics programmers will now at least have heard of spherical harmonics as they are an extremely efficient way of capturing lighting irradiance. Given their importance, there have been several excellent tutorials written to help the games industry understand how they work. But my impression of the industry is that many people's understanding of them is not yet at "comfortable" level. The use of spherical harmonics in graphics does not require comprehensive knowledge of the maths that underpins them, but it's definitely a step up from what was required of a programmer in a younger industry.

To add some context, it's worth noting that the use of spherical harmonics in lighting is now several years old. By industry standards spherical harmonics are by no means a new thing. I'd hazard this is evidence of their mathematical complexity reaching beyond what the industry is truly comfortable with handling.

Spherical harmonics are definitely not the most complex mathematical model in graphics. To use a more recent example: In the ShaderX7 Shadows section there's a really excellent paper by Mark Colbert and Jaroslav Křivánek, "Real-time dynamic shadows for image-based lighting". I won't go into the implementation details here, but suffice to say it's non-trivial. It requires familiarity with some fairly advanced linear algebra, a very sound knowledge of sampling, and solving some fiddly least-squares problems with some interesting regularisation to prevent overfitting. It's not dissimilar to the level of complexity of your typical SIGGRAPH paper. 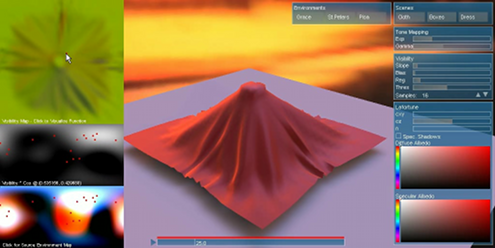 It's a pretty steep learning curve these days.

(Get your proposals in!)